New limited episode series to air on Lifetime, about Lizzie Borden after her acquittal. Fictionalized, of course. No, haven't seen it, and always risky to discuss something one hasn't seen or read. But this really seems nothing except sheer money grubbing exploitation and feeding the vicarious blood lust thrill of some viewers. This was a real person, who most likely was sexually and or physically abused by her father, a man who was feared in the community. Ghost investigators to the Borden house -- those that have listened -- have come away with the message that the spirits are not only tired, but damn angry, at the intrusions and carnival like atmosphere that's been created around the home and the history. And so now, he have this new series from Lifetime. Just seems in very bad taste.

It has been awhile since I posted here. That's the downside of managing so many blogs. But I'm still here, still interested in ghostly activity and things that go bump in the night, and so here is a link: Ghost Adventures Cast Member Claims No Fake Ghosts | Paranormal.

Good to know. Despite myself, I have found myself liking Ghost Adventures and have always felt they were honest. Sometimes their tone and antics annoy me but overall their authenticity comes through.

Contacting the Dead - Shows - Coast to Coast AM

Bought the new Talking to Heaven Mediumship Cards deck created by Doreen Virtue and medium James Van Praagh. I don't like the images at all; they are photographs and it seems cheap to me. A matter of taste. I do like the card back design; a bit typical with stairs and puffy clouds all about, but it's all right.

However, so far, as an oracle, I have had some intense mini readings. My cat Matisse died a couple of weeks ago. He was eighteen, and hadn't been doing well the past year or two, just getting old. We literally spent an entire Saturday watching him let go of life and it was damn hard. I have some guilt over this, as I did with my cat Roswell, who was killed by two dogs in May. I still haven't gotten over his death. As we do when loved ones die, we often question if we could have done things differently, and if only we had, we could have prevented their deaths. A normal reaction for many of us but it's also non-productive and not true. My question was "What do I need to know?" surrounding Matisse and Roswell, and the card that I pulled: "You have nothing to feel guilty about."

A few nights ago I attended a "dumb dinner" (eating in silence, with a place setting, with food, for the ancestors) and afterwards, a sort of seance with the use of ghost hunting equipment. We all took turns holding an EMF detector, for example. It lit up and flickered while I held it (it did this for Jim as well) and I felt the presence of my Dad. I didn't hear his voice, or see any images, but I knew it was his spirit, and not anyone else's. Can't explain it more than that. There was also the ghost box (hacked radio that allows spirit voices to come through) and as I was thinking of my Dad, asking him if he was present, a few bars of jazz came through -- he was a huge jazz fan. 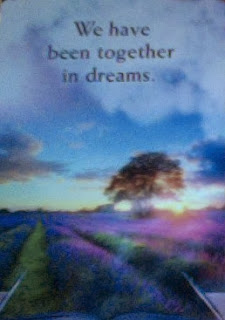 One thing about my Dad -- he has been appearing in my dreams, and his presence in those dreams has evolved. For some time, when he appeared to me in the dream state, he was silent, clearly unhappy. He seemed lost. He was usually behind a glass door or wall; the kind of pebbled glass that you can't see through clearly. His face was usually gray, ashen. The last couple of times he appeared in my dreams he was very happy, talkative, walking around, engaging with me. He looked healthy. Again I asked the cards, with the intent of communicating with my Dad, "What do I need to know?" The card that came up was "We have been together in  dreams."
Posted by Regan Lee at 1:28 PM No comments:

Researching Prayer on Coast to Coast AM

Tonight's C2C: prayer, and how effective it is. I suspect how to be successful ... Researching Prayer - Shows - Coast to Coast AM
Posted by Regan Lee at 8:31 PM No comments:

On C2C tonight:Haunted Locations/ Open Lines - Shows - Coast to Coast AM
Posted by Regan Lee at 7:30 PM No comments:

Seances tonight's topic on Coast to Coast AM

The first part of the show deals with war and security, but the second part discusses senances:

WarSecurity/ Seances - Shows - Coast to Coast AM:Second Half: Author M.J. Rose will discuss the history of seances and techniques that have been used by the likes of Victor Hugo, Mark Twain, Mary Todd Lincoln and Arthur Conan Doyle to access the souls and spirits of the departed. She'll share stories and legends about the seance, and its connection with reincarnation.

I manage several blogs: Frame 352, The Orange Orb, Animal Forteana, Women of Esoterica, Vintage U.F.O., Mothman Flutterings, are some of them. I also contribute to a few: UFO Mystic, UFO Digest, among others. I started this ghostie blog because, aside from my life long UFO encounters, I've also had experiences with spirit energy and ghosts. I am particularly intrigued by ghost stories that parallel or even mimic alien/UFO events, or vice versa. If you have a ghost story you'd like to share I welcome your submissions.